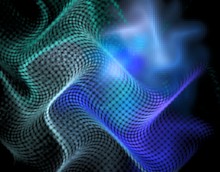 In the past ten years ionic liquids have become an area of increasing popularity in academic research which has resulted in the stellar rise in the number of publications in this field. This rise can in part be attributed to the wide ranging applications these novel materials can be adapted to. Only recently has this new field attracted the attention of a growing number of surface scientists interested in exploring the interactions at the both the liquid/gas and liquid/solid interfaces. Of particular interest is the structure and composition of the liquid/gas interface as this is where the adsorption and absorption of gasses occurs. These processes are known to play key roles in processes such as heterogeneous catalysis and gas distillation and separation. Aside from such obvious applications, the surface analysis of ionic liquid helps in the fundamental understanding of these unique materials.  Here we list a number of publications where Kratos AXIS spectrometers have been used to generate valuable XPS data from ionic liquids,

The in situ monitoring of catalysis in Room Temperature Ionic Liquids (RTILs) is fundamental to the understanding of catalytic processes and the role of RTILs in catalytic turnover; we describe how XPS can be used to give information on both pure RTILs and catalytically-active RTIL-based solutions.

Ultra-high-vacuum (UHV)-based techniques can offer the scientist a tremendous amount of information about samples of interest. However, until recently the range of samples that could be routinely investigated using unmodified instrumentation was limited to solid samples and frozen solutions. In this paper we report the investigation of low-vapor-pressure, liquid samples using both X-ray photoelectron spectroscopy and time-of-flight secondary ion mass spectrometry. We demonstrate the suitability of UHV techniques in the investigation of a range of room-temperature ionic liquids, offering the opportunity to measure high-quality solution-phase spectra using unmodified instrumentation.

S. Men, B. Hurisso, K. Lovelock, and P. Licence, “Does the influence of substituents impact upon the surface composition of pyrrolidinium-based ionic liquids? An angle resolved XPS study,” pp. 5229–5238, 2012.